round the beginning of 1991 I quit university and decided to open a market stall. Learning to be a primary school teacher didn't look like such a good idea at the time, and I preferred the idea of hawking something at the street markets than earning minimum wage working with dull unenthusiastic losers (the other teachers, not the kids).

Anyway, what to sell? My artistic skills had lain dormant for most of my life. Then I had a strange idea. I knew where I could buy a large quantity of neckties. Also, I had a solid old sewing machine I bought for ten dollars at a church fete. Perhaps I could take them apart and make something out of them?

This was the first design (though not the first actual quilt, that got sold). It was simplicity to make. All I had to do was:

Once I got my hand in, I could turn out one a week. They sold at about this rate too, so I was earning between $600 to $800 per week. I was working long hours, and it was tedious and weary work, but far better than teaching.

Later in that same year I was ambitious enough to move out of my fathers house where I was living and working, and into a warehouse studio in Glebe, quite close to the best markets. This turned out to be the greatest turning point in my life, but that's another story. At any rate, my timing was impeccable, because the economy stalled at that point, interest rates dropped, jobs dried up, and people stopped buying expensive quilts at street markets. 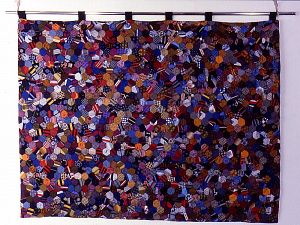 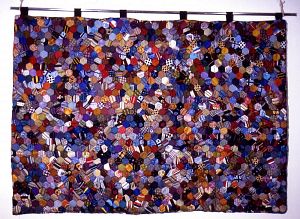 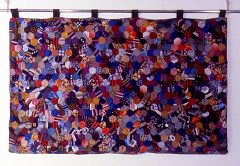 Having nothing better to do, and living in a big warehouse artist colony, I kept making quilts. Trying to add value, I started making these more traditional style quilts. Still with no global design, but at least with hexagonal patches. I developed a nifty technique for doing this quickly and accurately, involving "maquettes", which are paper patches stuck to the back of each tile. Also I developed an assembly line technique for making roseattes of 7 patches, then sewing them together in strips and joining the strips edge to edge. 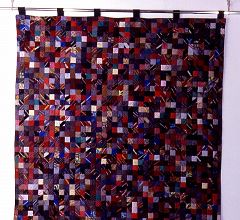 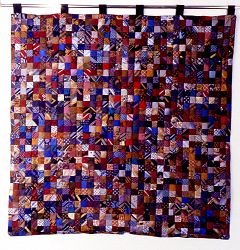 You would think the square patches would be easier to work with but they weren't. They had a tendancy to go diagonal, also it was hard to get the seams to line up correctly. 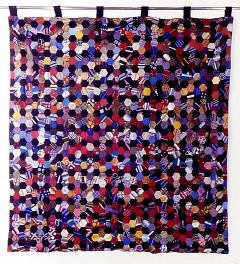 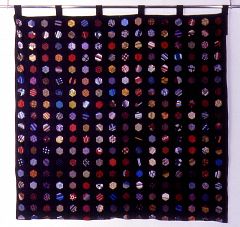 The hexagons were easier, but sometimes people seemed to be overwhelmed by the riot of colour. I tried adding black, first interspersing black patches with the colour, then colour with the black. I prefer the latter.

The above quilt was made entirely from silk neckties. It felt great, but the colour was lacking, because too many silk ties are grey and subdued corporate colours.

This quilt was one of the last regular kind I made. The coloured patches are from Hawiian shirts. I tried to sell this one through the AD163 gallery cafe, but they had it for 3 years and couldn't budge it. I let them keep it because I found my cat Mozart there.

Because the warehouse was infested with cyberpunks, I was soon assimilated into their ranks and spending the bulk of every day messing around on a computer learning to use the first versions of Photoshop and Hypercard and Director, and playing network games like Bolo and Marathon. I didn't completely give up on them though. See Bitmap Entities to find out the next direction my quilting took.